Wouldn’t it be nice to know how much milk you have left in the fridge while you are out shopping? The ‘smart’ fridges might be on their way to the market, but they are not cheap. We started testing the feasibility of a small module that can be added in a ‘dumb’ fridge and this is what we have learned.

In this blog post we detail how we came to the final setup below and what we have learned from building this project. 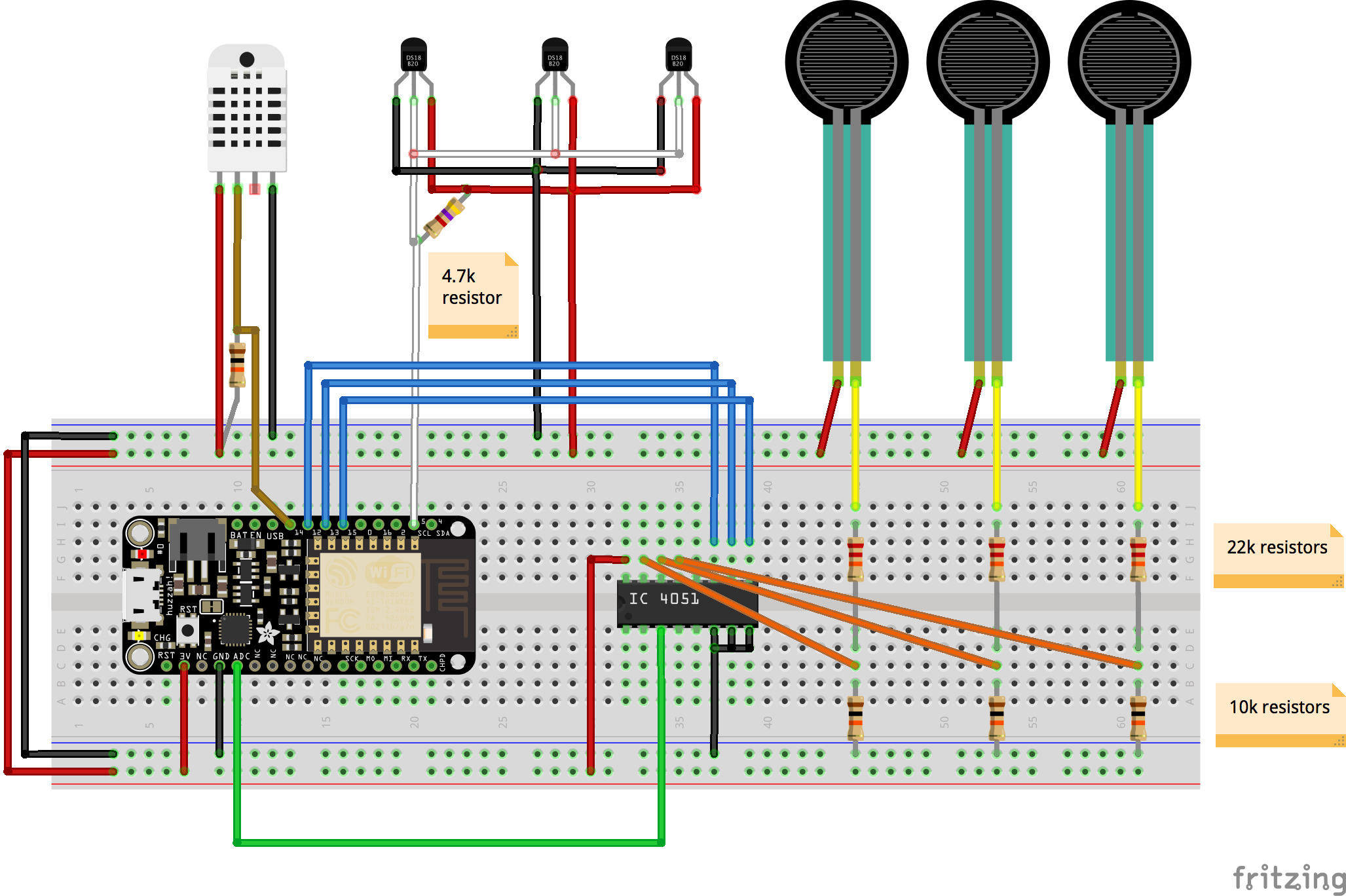 The total cost of building the scale with 3 pressure sensors (excluding the temperature sensors) was around 50$. Here’s the bill of materials (BOM):

Our code for the project is available on GitHub.

A bit of background

We want to see if we can solve the eternal question of whether we already have milk in the fridge, how much and whether we need to buy more.

Of course, the most important function of a fridge is to keep its contents at a cool temperature. Whatever changes we make to it, these must not affect its main feature.

Knowing if there is milk in the fridge could potentially result in (1) less milk being spoiled (by buying only the quantity the milk that is needed) and (2) saved time and less frustration (that is usually associated with having to go back to the shop).

We did not find any ready-to-buy products on the market and therefore found the challenge quite interesting.

We started working on a prototype back in May 2016 and kept a change log with the progress on the project. Here it goes: 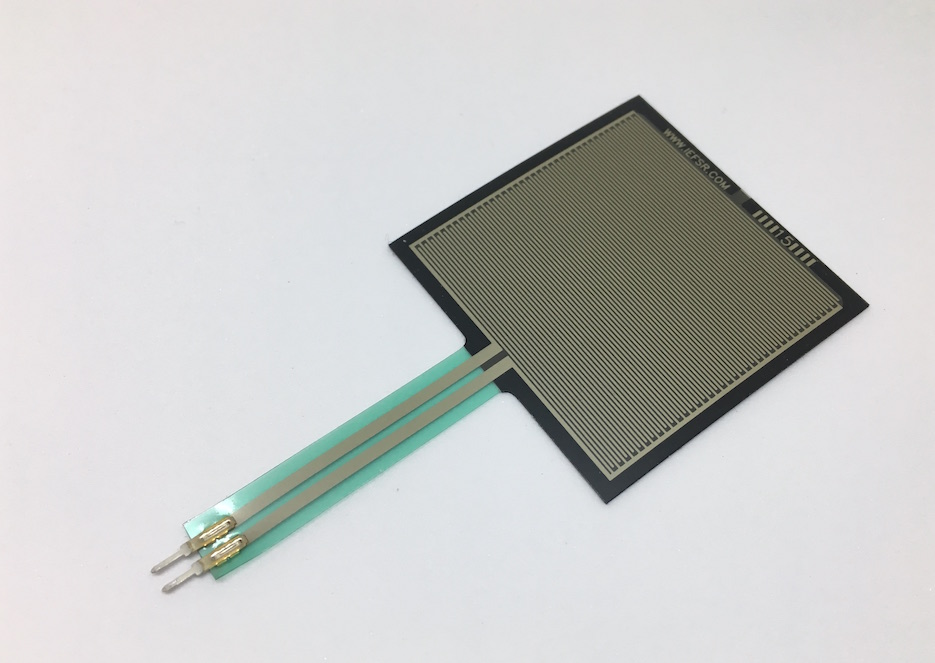 We started using an FSR (force sensing resistor) for measuring weight even though we knew that these are not able to measure precisely. We knew that the alternative would be load cells, however, the FSR looked much easier to get started with, and had a nice thin profile which we thought would be more suited for the project. 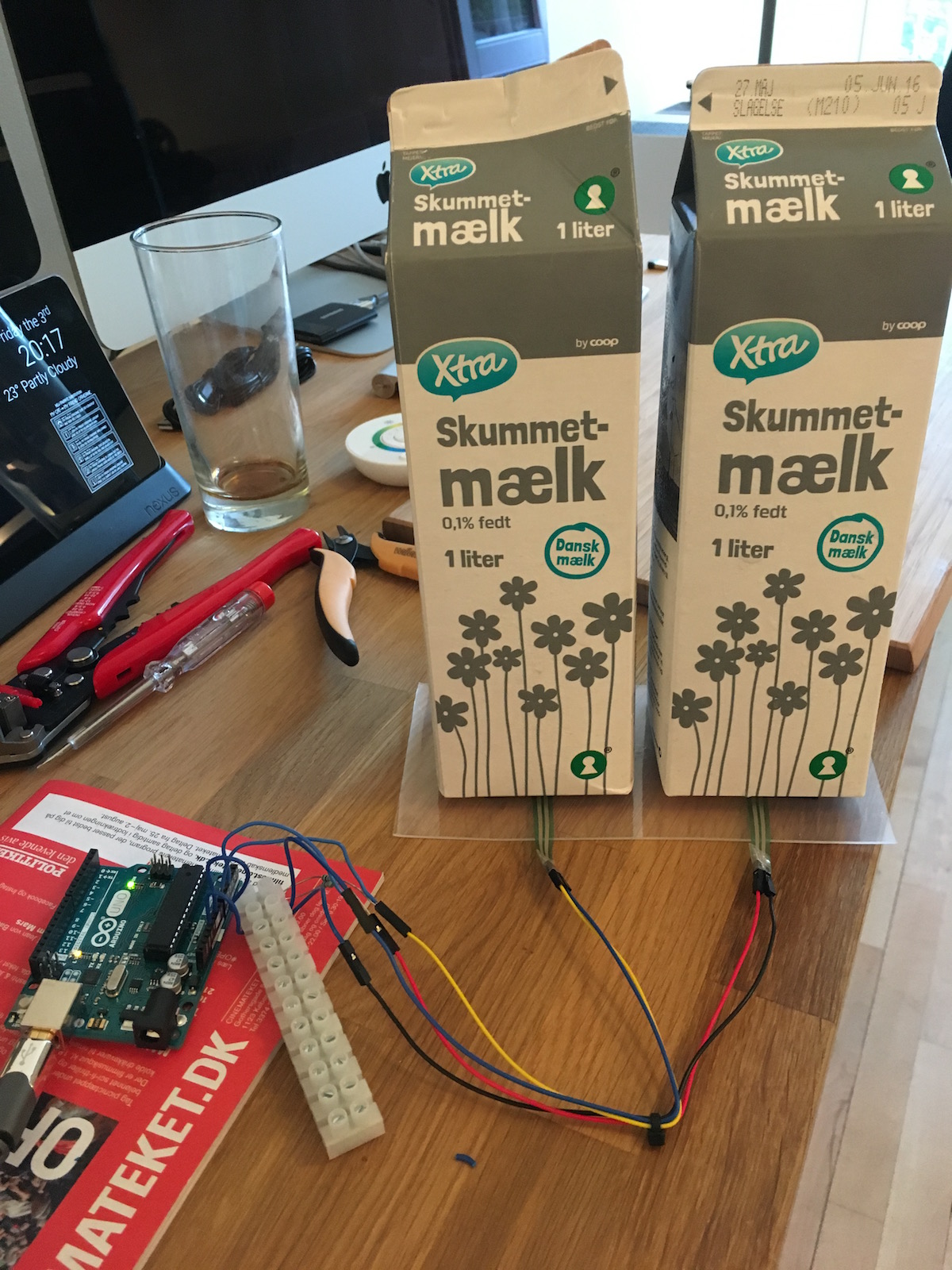 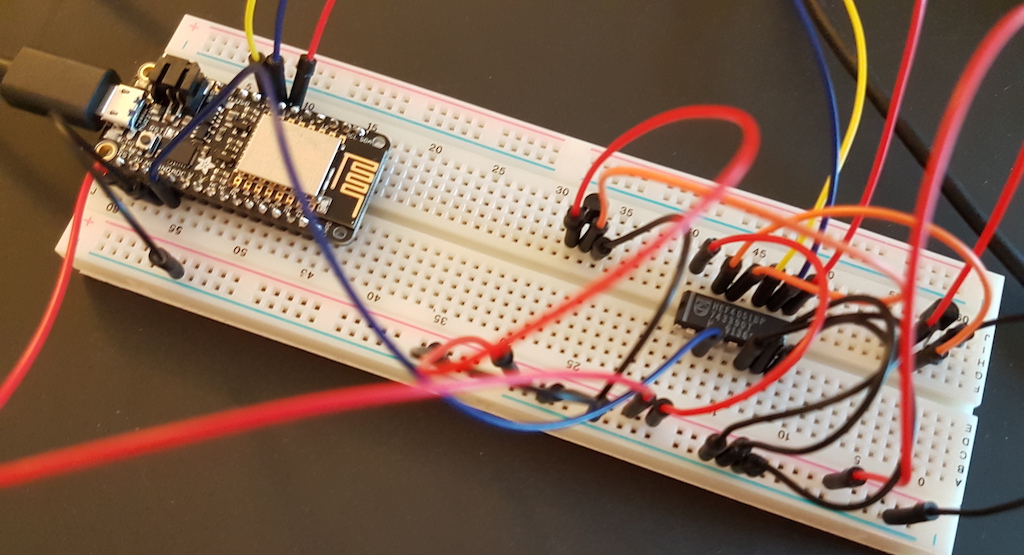 The Feather Huzzah is a small development board with built-in Wi-Fi, which is why we chose it for this IoT prototype. However, the FSRs are analog and the Feather Huzzah only has 1 analog pin, which means that if we want to use several analog sensors with one Huzzah we need a multiplexer. We used the 4051 MUX.

Check out our Pinterest board with inspiration for the milk scale: Smart Milk Scale Design. 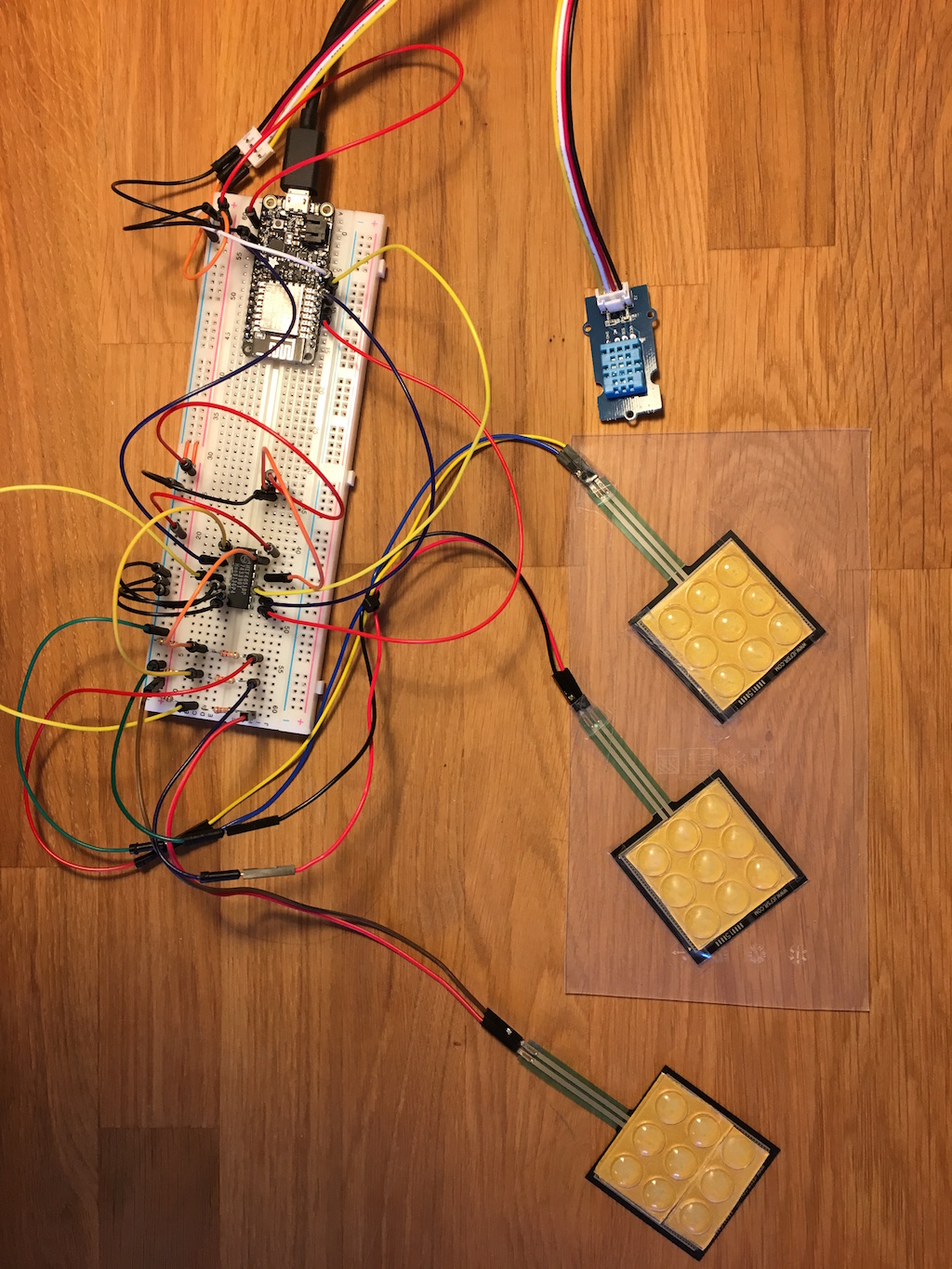 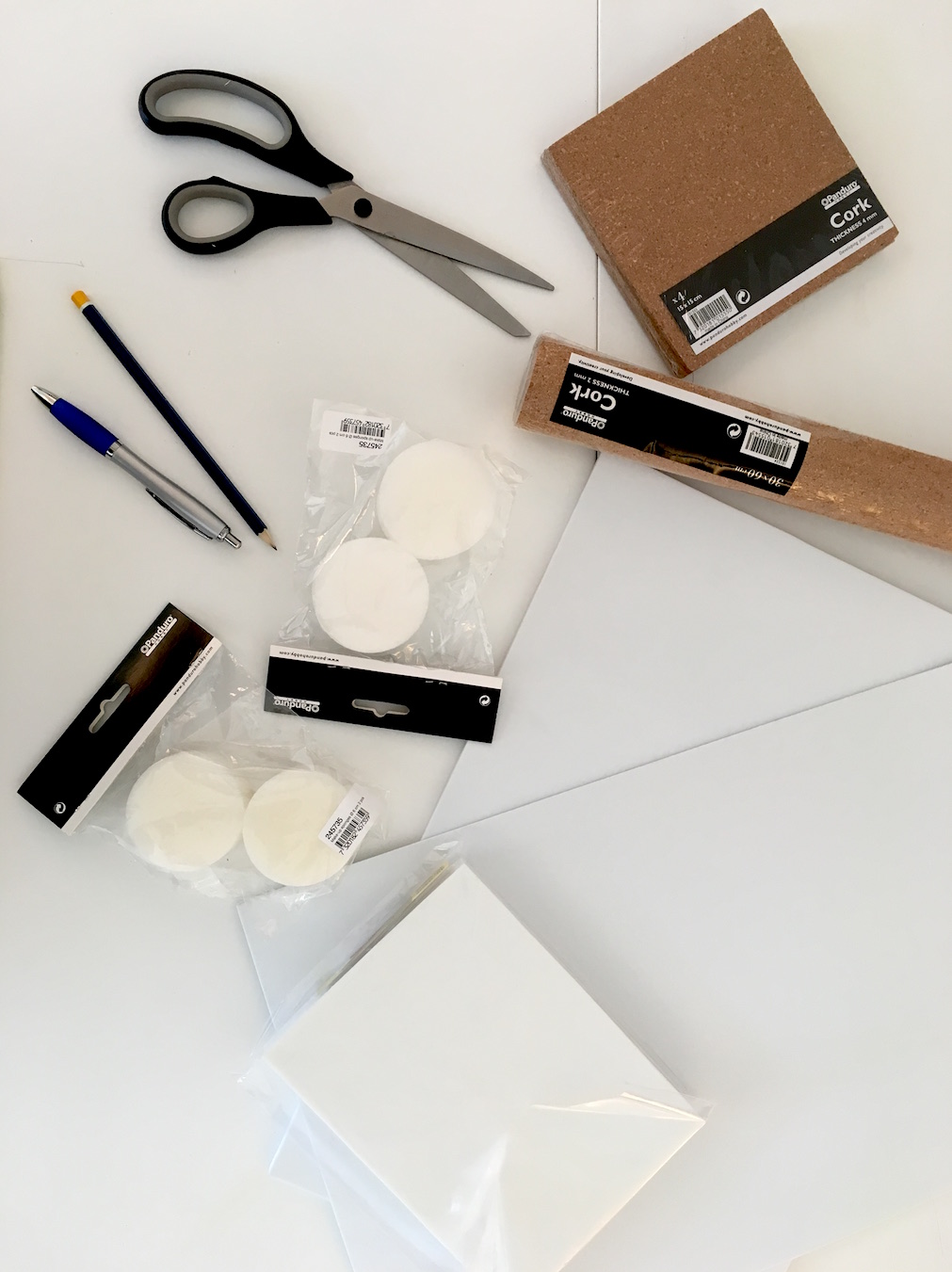 We learned (ref) that we need something soft on top of the FSR, so we bought various materials such as foam, neoprene, and cork. 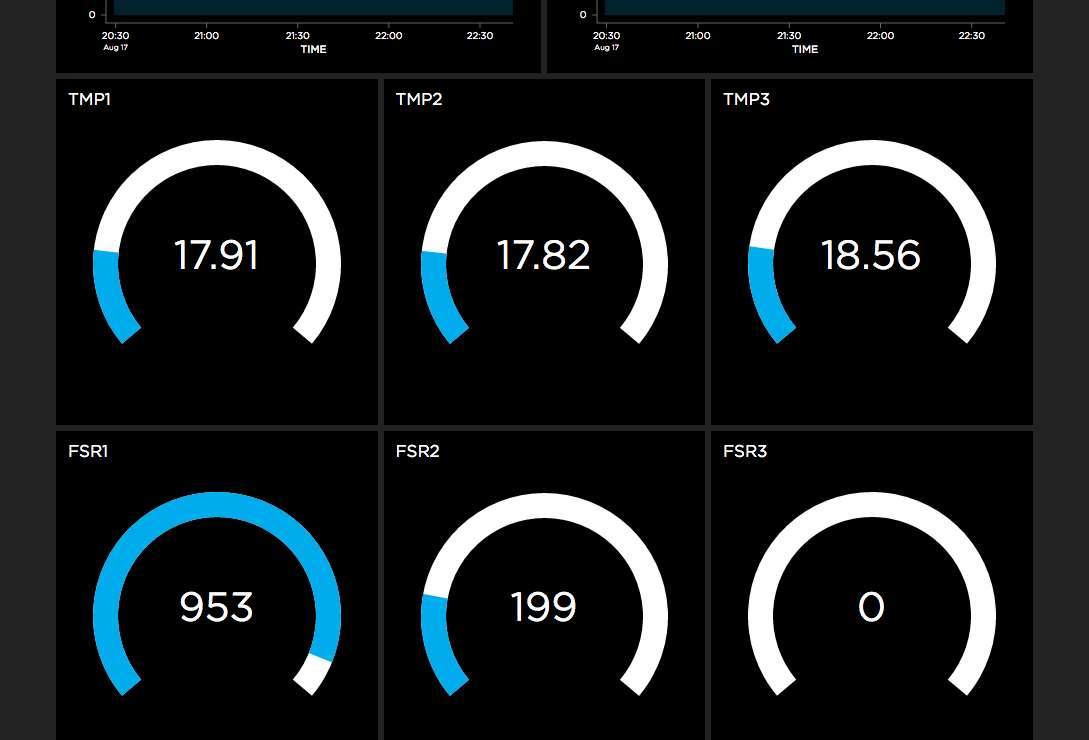 In the end we changed the TMP36 analog sensors with DS18B20 digital sensors, which are working nicely, and are much easier to use for our use case.

We’ve written this blog post about what we found inside. 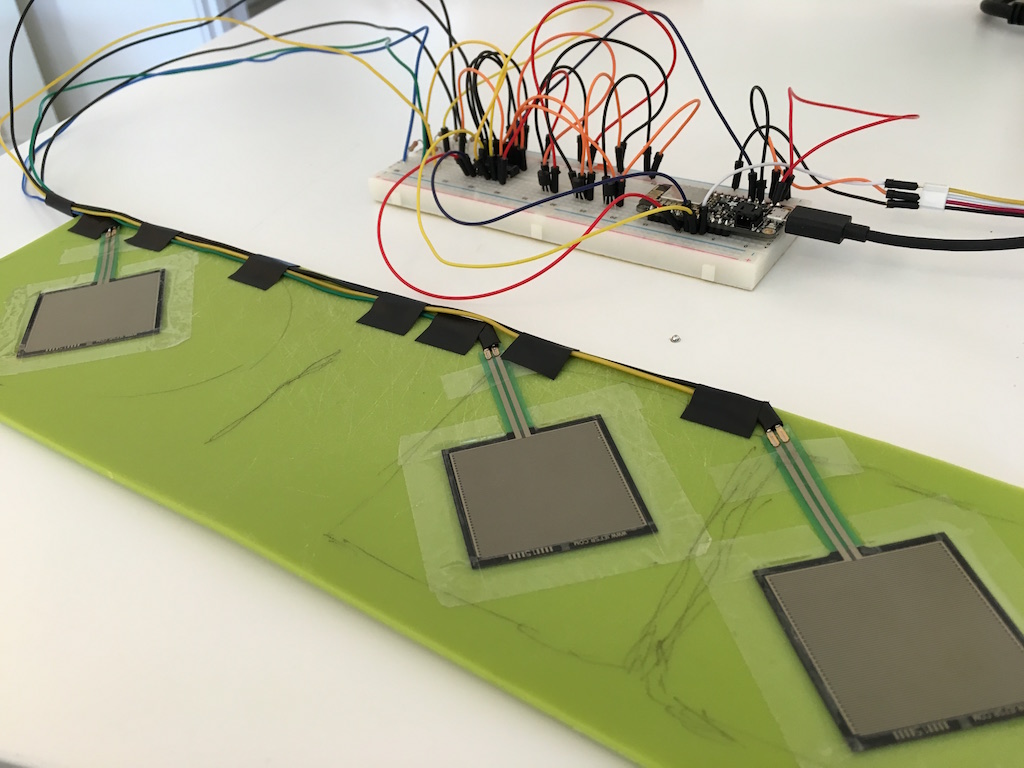 We can fit 1 jug of water and 2 milk cartons in the fridge door, so we marked the location where these will be as guidance for where to place the FSRs. 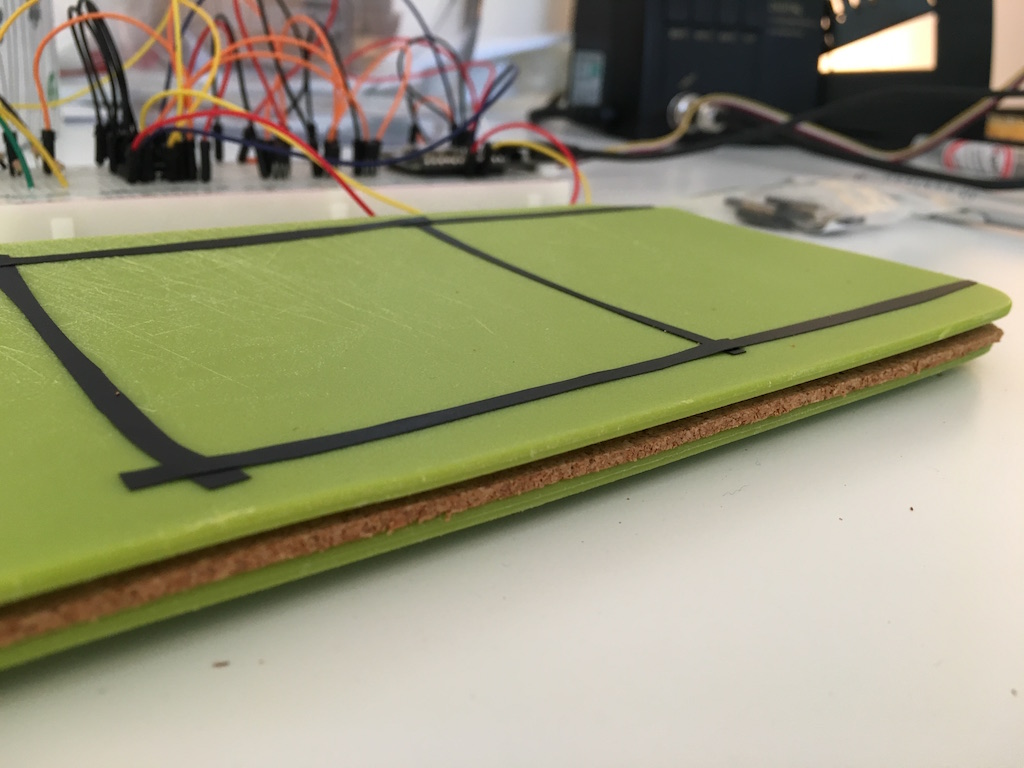 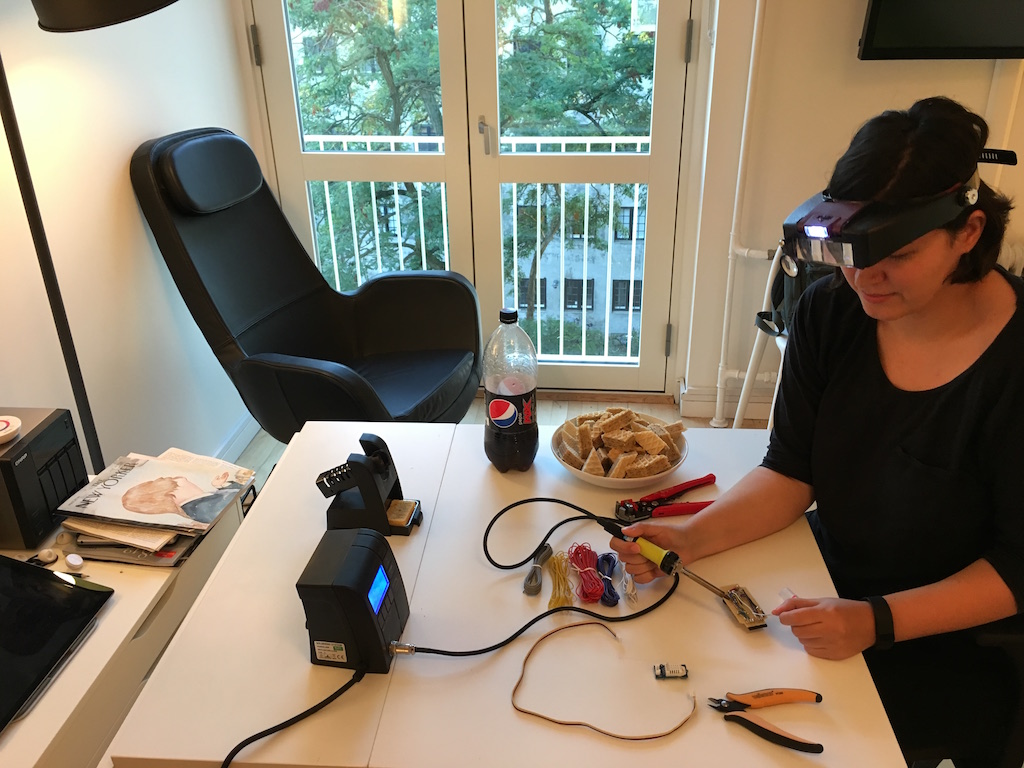 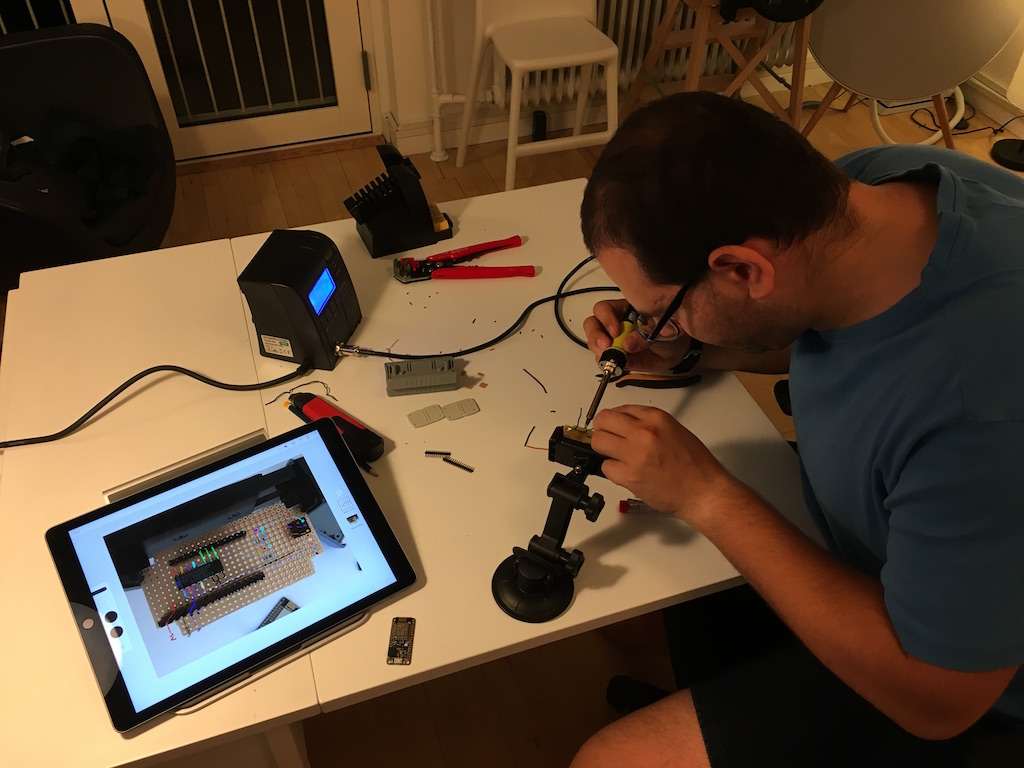 We fitted the perfboard into the smallest case we could find at our local electronics shop. 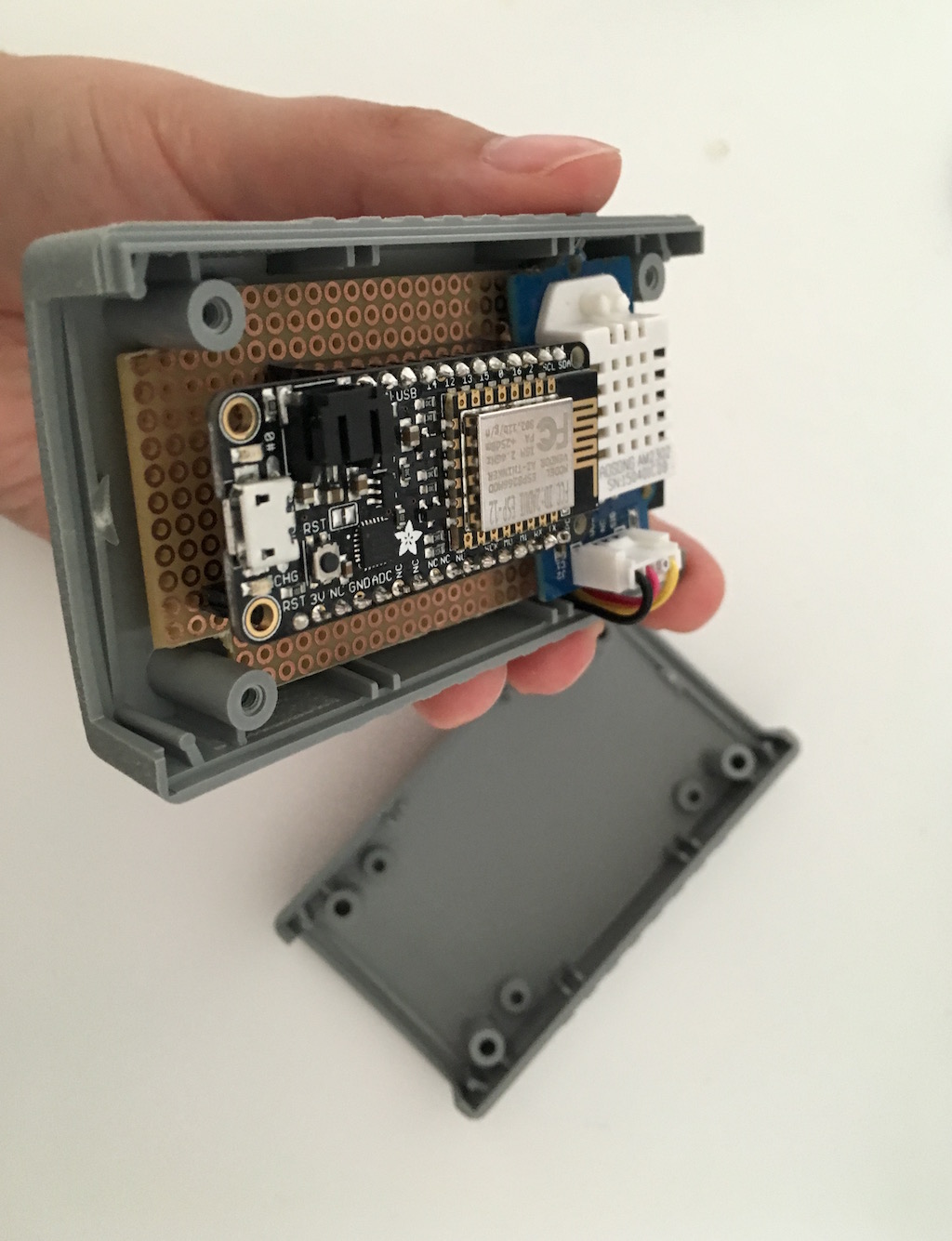 Here’s the result, with the 3 FSR sensors tightened in the green layer set on the bottom shelf of the fridge door, and connected to the Feather Huzzah that is sitting on the shelf above, powered by a battery. (There is room for improvement in terms of cable management.) 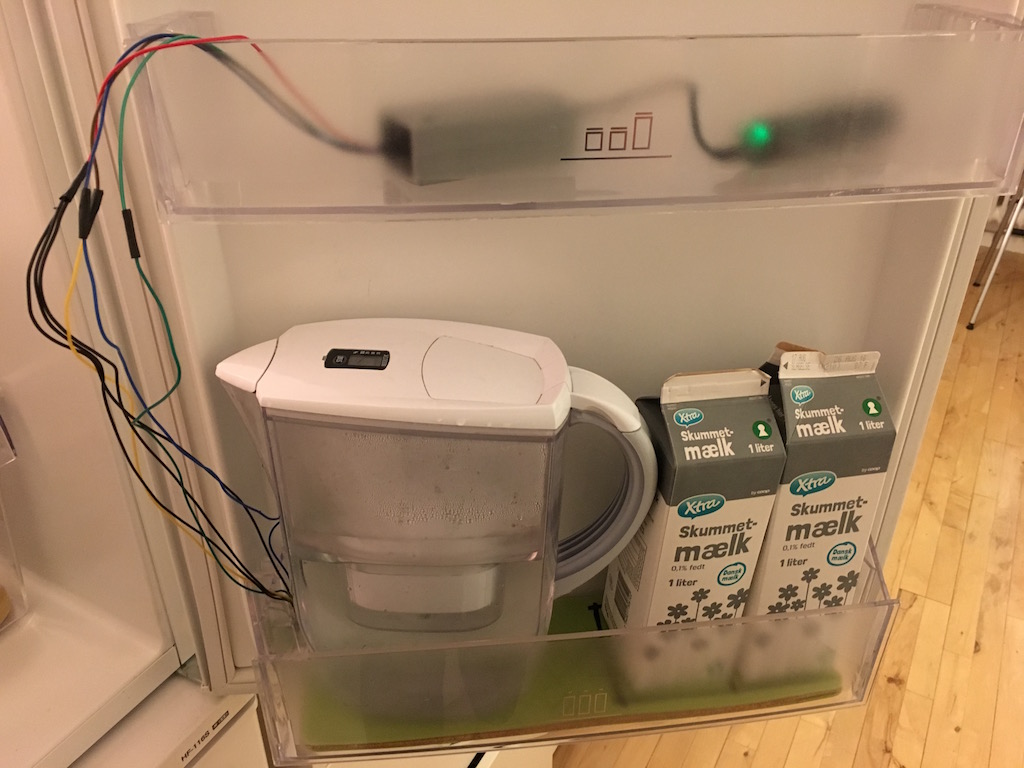 The Huzzah did not last long on the battery though. We don’t have exact figures, but with publishing data each 6-10 seconds to Adafruit IO it did not last longer than 24 hours. We ended up replacing the battery with a cable that goes out of the fridge into an electricity plug. 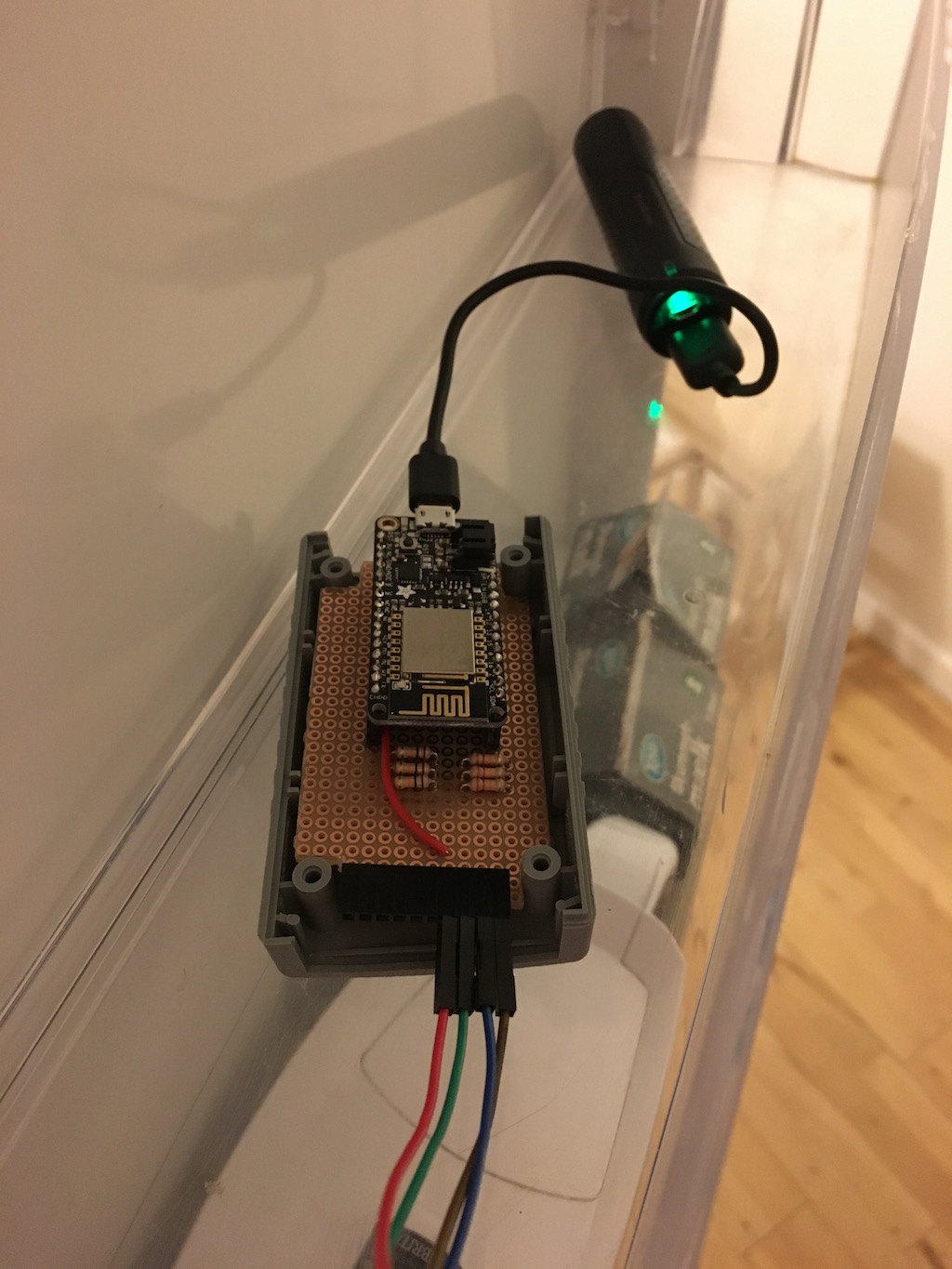 The FSRs work better when we add some soft cushioning material like foam on the FSR surface in order to distribute the pressure on the sensor.

They are not accurate and sensors can differ between each other with around 10%. This means that for the task of finding how much milk is in the milk carton (from 0 to 1 liter) we require some calibration and threshold setting per sensor. The value for a full 1 liter milk carton is somewhere around 1001, while a half-full milk carton is somewhere in the area of 985, so it is difficult to directly translate these values into weights.

The FSRs are useful for projects where we need to detect presence and are not interested in the how much pressure is applied. So it is fine if we are interested only in knowing whether we have milk cartons or not.

However, we want to get more precise measurements, so next step would be to try building the milk scale with a load cell instead.

[UPDATE 30-OCT-2016]: Added YouTube video with a demo of the smart scale prototype: